The core competences of the department are in the development and production of new nanostructured functional and protective coatings for applications in microsystems technology, nanotechnology and tribology. 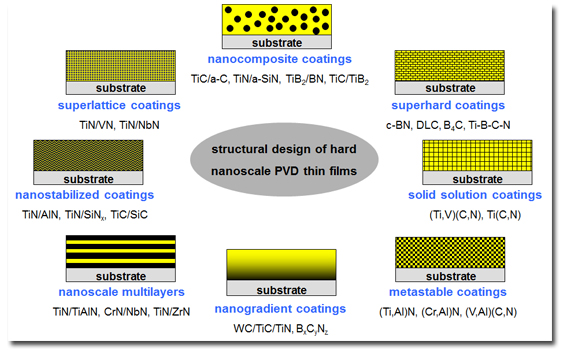 Soft magnetic films for high-frequency applications up to the lower GHz range are deposited as single or multilayers by reactive magnetron sputtering. The thin film materials are selected with respect to their CMOS compatibility. The magnetic film properties needed for their high-frequency suitability are obtained by annealing the films at temperatures of more than 400 °C in a static magnetic field. Fe- and Fe-Co-composites represent the ferromagnetic material base paired with refractory elements and e.g., nitride. Lithography and etching techniques enable patterning of the films as well as the production of HF-micro components by using chemical or physical plasma etching with high accuracy.  High frequency set-ups up to GHz-range are used for the HF-characterization of the films and of the components.

Furthermore we develop and fabricate magnetic films for microsensor applications.

Nanoscale, multifunctional protective and functional coatings are made from metallic, covalent or heteropolar hard materials with special layer concepts (nano composite films and nanolaminated multilayer films), and designed by thermodynamic modelling of the material systems and by modelling the kinetics of the vapor deposition.  The fabrication is implemented combining different PVD-processes as well as with new CVD-/PVD-hybrid processes.

A deeper understanding of the correlation between constitution of the films, the interfaces, properties and behaviour of the composites allows for a targeted optimization of the nanoscale surface layers regarding their mecanical, tribological, physical and chemical requirements.

last change: 2013-03-13 KIT – The Research University in the Helmholtz Association