α = thermal diffusivity, ρ = density and cp = specific heat capacity of the sample. The Laser-flash-method is a standard procedure for measuring the themal diffusivity. In this method, a heat pulse is generated by a short laser pulse at the end face of a cylindrical sample. The duration of this heat pulse from the end face to the back of the sample determines the thermal conductivity at a given sample thickness.

Standard procedures such as the laser flash method are not suited for the investigation of materials and components of micro systems technology and thin film. To determine the thermal conductivity of thin films or structures in the micrometer range so called photothermic procedures are applied. Thermal waves are generated by irradiation of intensity-modulated light to the sample surface. Their runtime behavior is subsequently measured. Thermal waves are spatially and temporally periodic temperature oscillations. They are subject to strong attenuation, which limits their reach. The penetration depth is determined by the modulation frequency of the incident light and of the thermal conductivity of the material. By focusing the incoming light a spatial resolution of up to several micrometers can be achieved, as only in the focus thermal waves are generated and thus only the heated area contributes to the measured signal. All photothermal methods have the type of generation of thermal waves in common, whereas they differ in the detection of temperature oscillation on the sample surface. 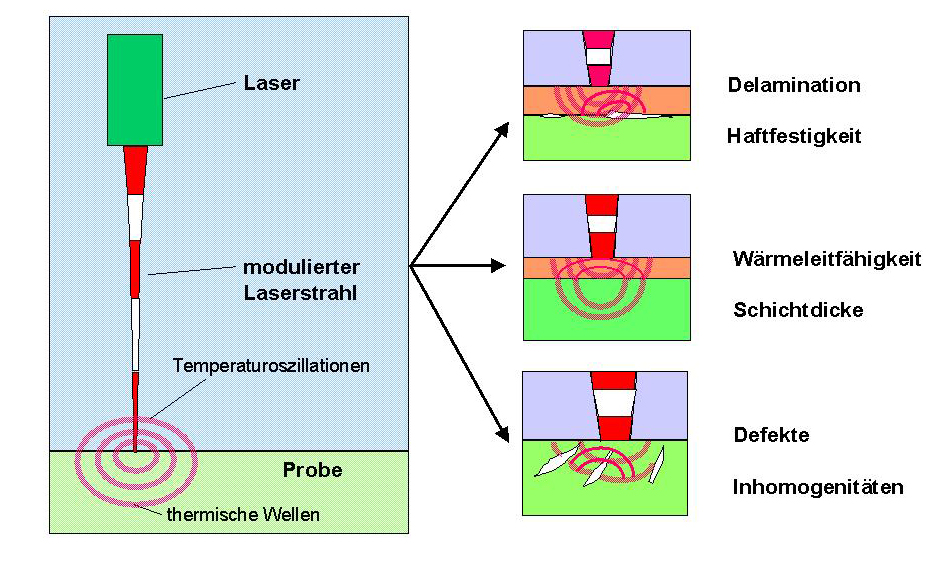 Laser-assisted joining uses the high spatial and temporal precision by which a focussed laser beam introduces heat into the joining zone. This local heat is important for the joining of very small components.

Within the research project SFB 483 ceramic pellets Al2O3 and SiC are joined with steel (C45E) using a CO2 laser (l=10,64µm). Various commercially available active solders based on AgCuTi are used. However, it was not possible to achieve a reliable wetting for SiC. Therefore we developed solders based on SnAgTi, which allow a homogeneous wetting of the carbide ceramic. To strengthen the brazed joints interlayers and intensifiers, tungsten and molybdenum, were used. The investigations showed that laser induced structures on ceramic joining surfaces, considerably increase the bond strength.

The surfaces of ceramic and glass-ceramic materials as well as glasses can be modified by laser dispersion and alloying and are set specifically in terms of their thermal, electrical and mechanical properties.

last change: 2013-03-14 KIT – The Research University in the Helmholtz Association