Poster Award at the 72nd Annual Meeting of the ISE

Lars Bläubaum has received the Lecture Video Award for the best presentation video at the Advanced Battery Power Conference 2021 with his presentation "Investigation on the Gas Saturation of Electrolyte on the Performance of Lithium-Ion Batteries". The whole team of the IAM-ET congratulates Mr. Bläubaum!

11.01.2021: The Institute for Applied Materials, Sub-Institute Materials of Electrical Engineering (IAM-WET) under the direction of Prof. Dr.-Ing. Ulrike Krewer will be renamed Sub-Institute Electrochemical Technologies (IAM-ET) by resolution of the Supervisory Board as of 01.01.2021. The IAM-ET will continue to be assigned to Division 3.

Award to Dr.-Ing. Philipp Braun (alumnus of the IAM-WET)

As part of the 11th Carl Benz Memorial Lecture, the Carl Freudenberg Prize was awarded on November 28, 2019. The prize has been awarded for more than sixty years to outstanding scientific work at today's KIT. This year, Dr.-Ing. Philipp Braun (in the picture: 2nd from left), an alumnus of IAM-WET, was among the prize winners. He received the award for his dissertation on "Electrical Characterization and Modeling of Solid State Batteries", which he wrote at the Institute and with which he received his PhD with distinction at the KIT Faculty of Electrical Engineering and Information Technology in spring 2019.

As chairman of the jury, Prof. Dr.-Ing. Dr. h.c. Albert Albers (Head of the Institute for Product Development (IPEK) at KIT, far left in the photo), who acknowledged the work of the award winners in his speech, and Dr. Julia Kubasch (second from right), Head of Scientific Networks at Freudenberg Technology Innovation, presented the certificates: In addition to Dr. Braun, Dr. Akanksha Bhutani, Mr. Matthias Luh M.Sc. and Dr. Bartosz Gladysz (from left to right) were pleased to be honored with the Carl Freudenberg Award.

This prize was donated by the Freudenberg Group on the occasion of its 100th anniversary in 1949; it is awarded every two years and this year was endowed with a total of 11,000 euros. The Carl Benz Memorial Lecture was moderated by Prof. Dr. Frank Gauterin (KIT, far right).

This year, the ITK Student Award was presented to Mr. Brian Schardt for his seminar paper in Electrical Engineering and Information Technology prepared at the IAM-WET.

30.10.2019: During a lecture of the IAM-WET at the Karlsruhe Institute of Technology (KIT), Brian Schardt, master student of the Electrical Engineering and Information Technology program, was awarded with this year's ITK Student Award . Dr. Sebastian Jakobs, Expert Engineer Functional Safety at the technology company ITK Engineering GmbH (ITK), presented Mr. Schardt with the award, which he received for his student work in which he implemented a modeling approach in Matlab that allows the calculation of battery overvoltages from an impedance. This tool is used, for example, to simulate discharge characteristics of a battery or to predict energy and power densities.

This year, the ITK Student Award was presented for the seventh time to students from all over Germany for their commitment and outstanding final and project work.

Large storage capacities, short charging times and no flammable liquid electrolytes - the solid-state battery should enable safe electromobility with long ranges in the future. In the "FestBatt" competence cluster, the Federal Ministry of Education and Research (BMBF) is funding the development of the next generation of batteries with 16 million euros. Fourteen scientific institutions are involved, including the Karlsruhe Institute of Technology (KIT). The competence cluster is coordinated by the Justus Liebig University Giessen (JLU).

The official press release can be found here. 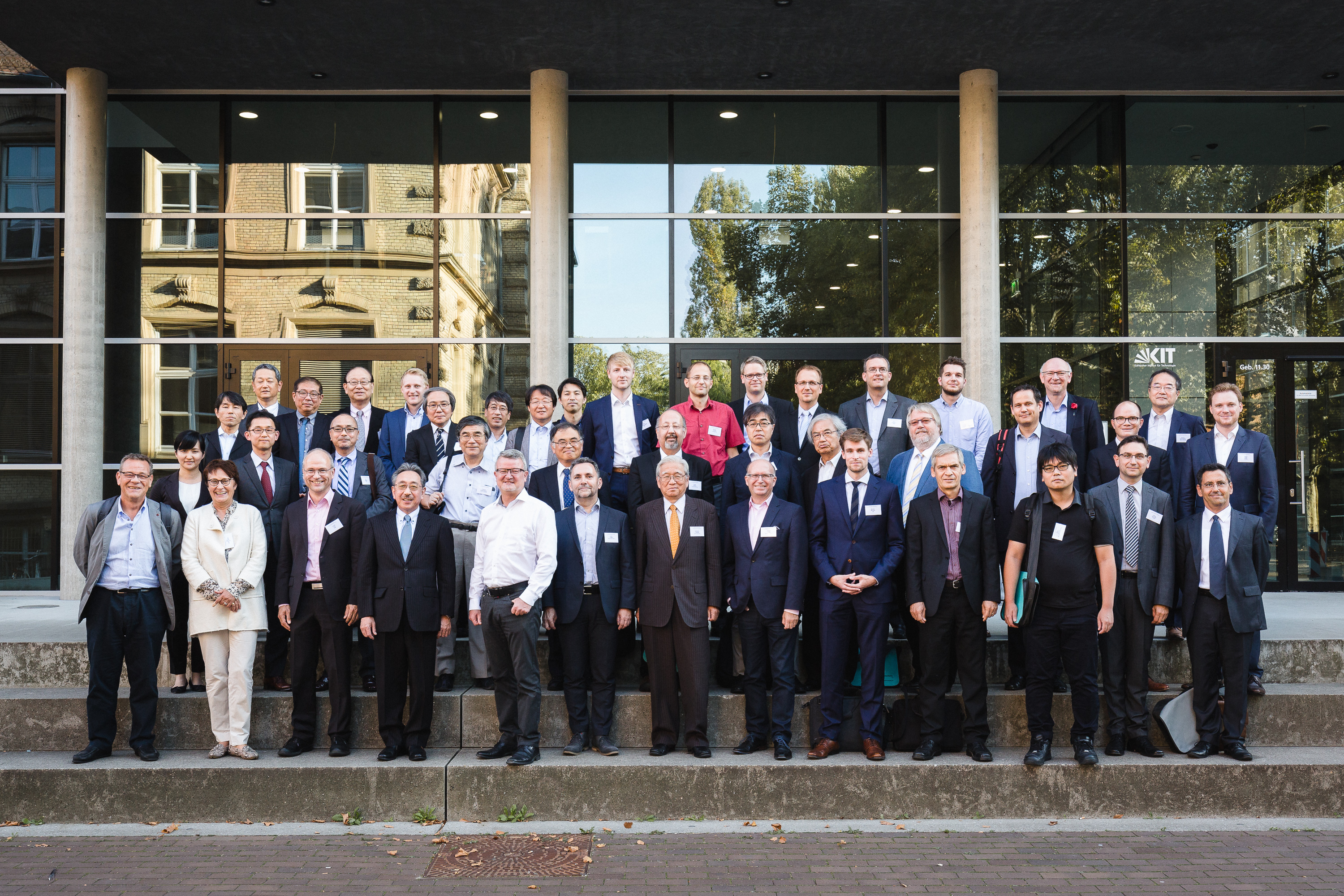 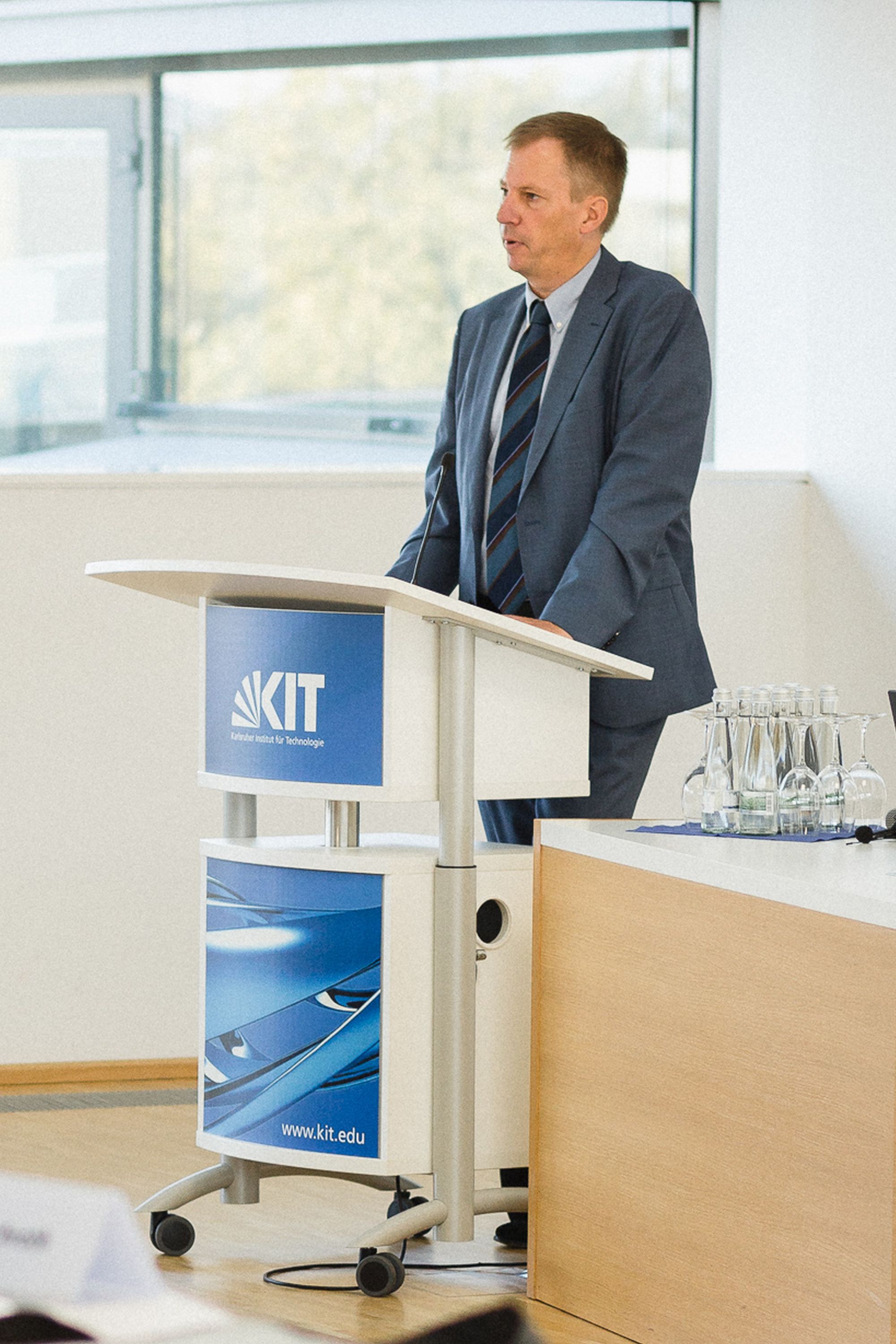 From September 19-21, 2018, the "6th German-Japan Joint Workshop on Advanced Secondary Battery Technologies" took place at KIT. About 50 invited participants from renowned universities and research institutions from both countries met for this scientific symposium, which is dedicated to promising research work on battery technologies in Japan and Germany on an annual basis. Sponsored by the German Federal Ministry of Education and Research (BMBF) and the Japanese New Energy and Industrial Technology Development Organization (NEDO), the workshop was jointly organized by Prof. Dr.-Ing. Ellen Ivers-Tiffée (KIT Institute for Applied Materials) and Prof. Dr. Jens Tübke (Fraunhofer Institute for Chemical Technology) and opened by KIT Vice President for Research Prof. Dr. Oliver Kraft.

Philipp Braun won 1st place at the 6th Battery Forum Germany with his poster on "Assessment of All-Solid-State Batteries with Different Solid Electrolytes". 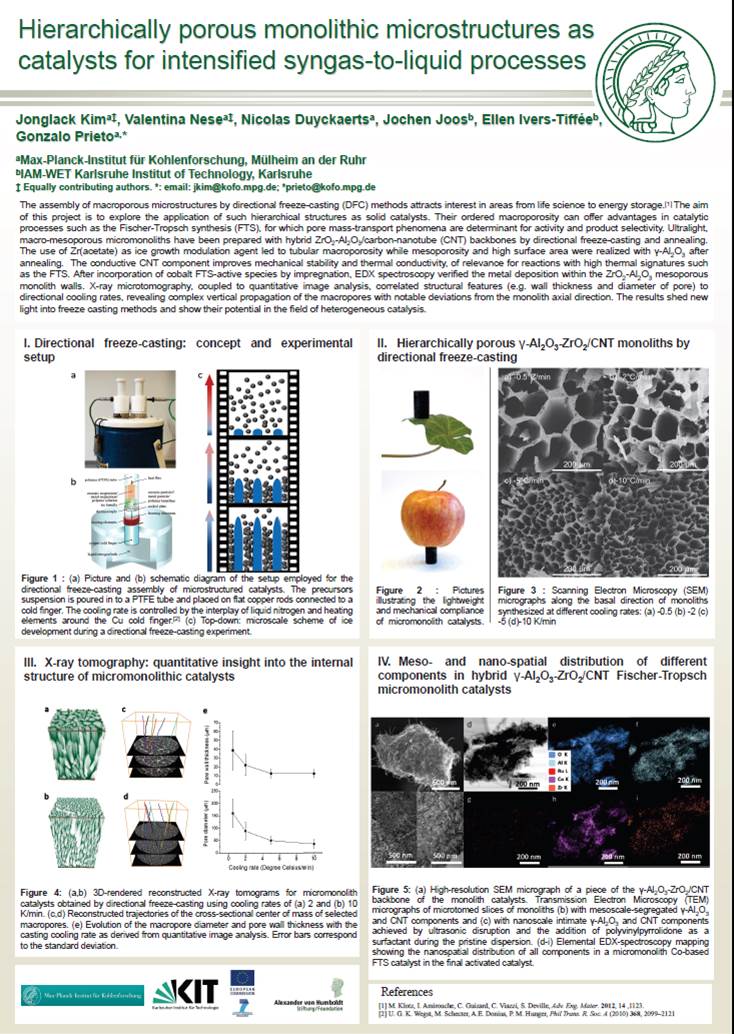 Jonglack Kim from the Max Planck Institute for Coal Research has won the Poster Prize at the 51st Annual Meeting of German Catalysts 2018. The poster with the title "Hierarchically porous micromonolithic structures with hybrid backbones as catalysts for intensified syngas-to-liquid processes" contains among others results of a joint project between the IAM-WET and the group of Dr. Prieto at the MPI in Mülheim. We congratulate Mr. Kim and Dr. Prieto!

Award of the Carl Freudenberg Prize 2017 to Michael Schönleber

Our former PhD student Dr.-Ing. Michael Schönleber was awarded the Carl Freudenberg Prize (1st place) for his dissertation "Method for characterizing the low-frequency behavior of lithium-ion batteries". The Carl Freudenberg Prize, which is endowed with 10,000 euros, serves to promote science at the Karlsruhe Institute of Technology (KIT). It is awarded every two years for the best scientific work with a scientific-technical background.
Unfortunately, Mr. Schönleber has left the institute after completing his doctorate and now devotes himself to the industrial implementation of his research results on modeling and simulation of lithium-ion batteries in Batemo GmbH, which he co-founded. We wish Mr. Schönleber all the best on his way and keep our fingers crossed for the success of his company!

Michael Weiss won an award at the 7th AABC Europe 2017 for his poster titled "Lifetime Analysis of Lithium-Ion Batteries by OCV-curve Measurements and Impedance Spectroscopy".

Award of the Ernst Schoemperlen Prize 2016 to Leonie Tatzel

11/23/2016: During the Carl-Benz Memorial Lecture at the Karlsruhe Institute of Technology (KIT), Leonie Tatzel, master student of the Electrical Engineering and Information Technology program, was awarded the 3rd prize of the Ernst-Schoemperlen Prize 2016 for her bachelor thesis on "Electrochemical characterization of a commercial high-performance pouch cell". With the Ernst-Schoemperlen Prize, a highly endowed award for outstanding scientific final theses and doctoral dissertations of KIT in the field of automotive engineering and automotive economics has existed in the region for about 25 years. With a total sum of € 10,000, this award stands out from the multitude of existing prizes.

IAM-WET and its research work in the field of electromobility are part of a new image film about the Institute for Applied Materials (IAM) of KIT. This film was currently produced in the broadcasting format MRS-TV of the renowned Materials Research Society (MRS), which portrays worldwide leading research institutions in the field of materials science.

You can find a link to the film here.

Presentation of the ITK Student Award 2016

This year, the ITK Student Award was presented to Ms. Leonie Tatzel for her bachelor thesis in electrical engineering and information technology. 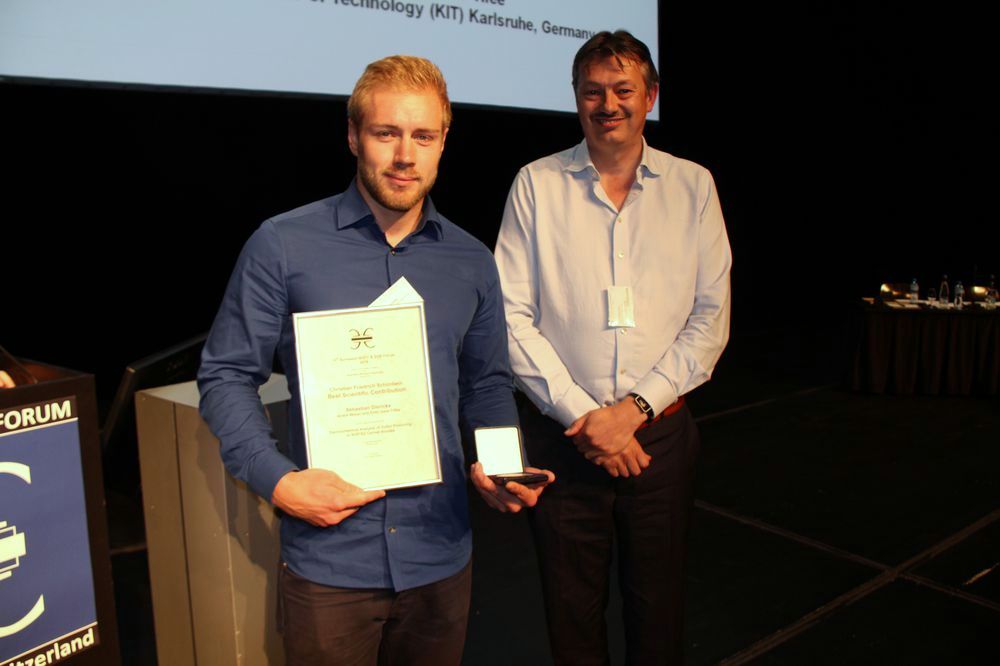 was awarded this year

from the Institute for Applied Materials - Materials in Electrical Engineering (IAM-WET) at KIT during the"European SOFC & SOE Forum 2016" in Lucerne.

Dhe award recognizes scientists for their research work in the field of high temperature fuel cells. The "European SOFC & SOE Forum", which was attended by 500 international participants, is one of the world's most outstanding scientific events in this field. The IAM-WET team was represented there with 4 lectures and 4 posters.

Presentation of the ITK Student Award 2015

This year, the ITK Student Award was presented to Mr. Ravindra Goyal for his Bachelor thesis in Electrical Engineering and Information Technology.

28.10.2015: During the Sensors lecture, Dipl.-Ing. Torsten Breitel from ITK Engineering AG presented the award to Ravindra Goyal. The Bachelor graduate convinced the international technology company with his outstanding Bachelor thesis in the Electrical Engineering and Information Technology course. His thesis dealt with the "Validation of impedance spectra of electrochemical systems" and was an assignment of the research group Batteries at IAM-WET.

The ITK Student Award is presented to the best students of ITK Engineering's partner universities from all over Germany. Students are awarded for particularly good project work or final theses with practical relevance in technical courses of study. 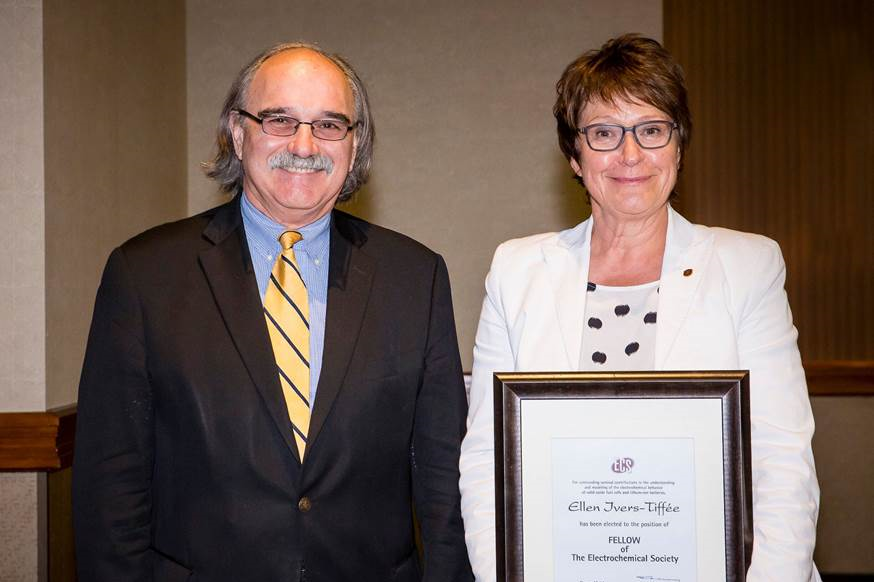 15.07.2015: The Electrochemical Society (ECS)has awarded Professor Dr.-Ing. Ellen Ivers-Tiffée, head of the Institute for Applied Materials - Materials of Electrical Engineering at KIT. Materials of Electrical Engineering at KIT, on the basis of her scientific in the field of electrochemistry of high-temperature fuel cells and lithium-ion batteries. and lithium-ion batteries. The presentation of the certificate took place during the 228th ECS Meeting in Phoenix, Arizona (USA) in October 2015. The ECS, founded in 1902, is one of the world's most important scientific societies in the field of solid-state and electrochemistry. electrochemistry and comprises more than 8000 members in more than 70 countries.

One of the first vehicles fully tailored to the requirements of electric mobility from a German manufacturer, the BMW i3, was delivered to the IAM-WET on 28.10.14. The vehicle has a purely electric range of about 140 km, which can be increased to about 300 km with the help of a range extender. An interface for reading out battery-relevant data is being installed by BMW AG and enables the investigation of battery behaviour under freely definable driving profiles as part of a joint research project. The picture shows the head of the IAM-WET, Prof. Dr.-Ing. Ellen Ivers-Tiffée, and the scientific staff members Dipl.-Ing. Michael Weiss, Dr.-Ing. Jörg Illig and Dipl.-Ing. Michael Schönleber collecting the vehicle at BMW-Welt in Munich. 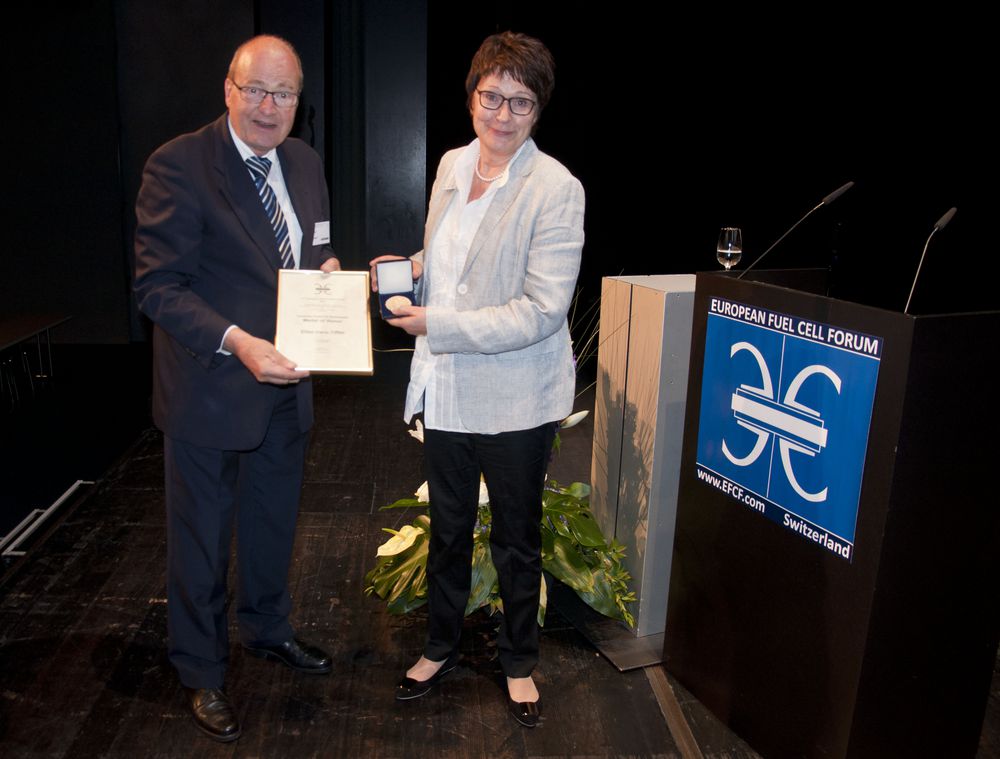 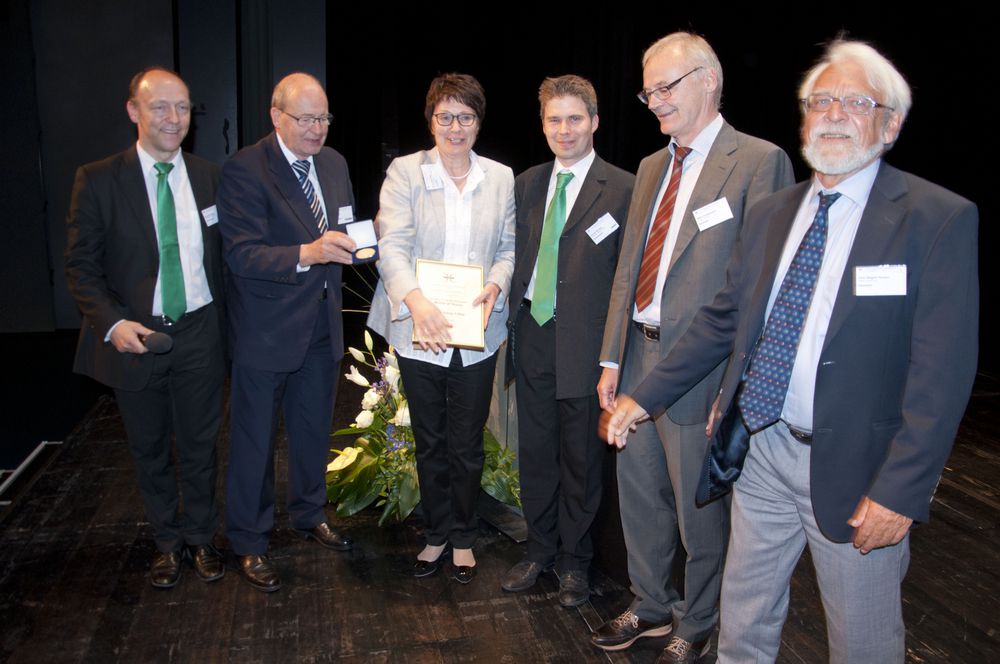 was awarded this year

from the Institute for Applied Materials - Materials in Electrical Engineering (IAM-WET) at KIT during the"European SOFC & SOE Forum" in Lucerne.

The award honors scientists for their research work in the field of high-temperature fuel cells. The "European SOFC & SOE Forum", which was attended by 500 international participants, is one of the world's outstanding scientific events in this field. The IAM-WET team was represented there with six talks and 4 posters.

03.07.2014: On Wednesday, 2 July 2014,the General Assembly of the Deutsche Forschungsgemeinschaft (DFG, GermanResearch Foundation) elected Prof. Dr.-Ing. Ellen Ivers-Tiffée, Director of the Institute for Applied Materials - Materials in Electrical Engineering at KIT, to the DFG Senate for the place 'Materials Science and Materials Engineering'. The Senate is the most important science policy body of the largest research funding organisation and central self-governing body for science in Germany. The DFG Senate addresses the overriding concerns of research, promotes cooperation between researchers and advises governments, parliaments and authorities by issuing scientifically based statements. Three of the new Senate members are female scientists. This brings the number of female scientists in the 39-member Senate to 13.

Dipl.-Math. techn. Jochen Joos will be awarded the poster prize at the 2014 Spring Materials Research Society (MRS) in San Francisco for his work on "Performance Simulation of SOFC Anodes Using a Three-Dimensional FEM Model and Microstructure Data from FIB Tomography" awarded.

Presentation of the Siemens Energy Award to Dipl.-Ing. Michael Schönleber 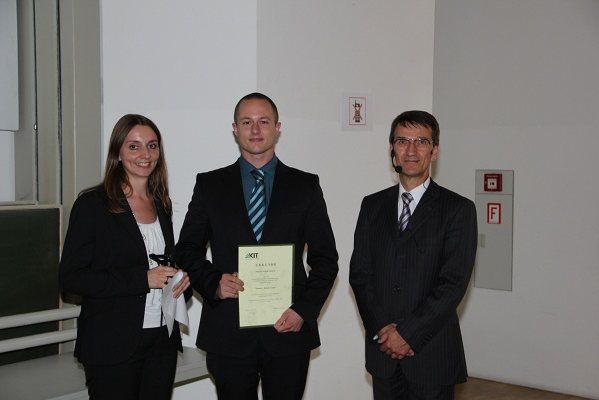 Our employee Mr. Dipl.-Ing. Michael Schönleber was awarded with the Siemens Energy Award at this year's Faculty Day http://www.etit.kit.edu/507.php, as the best graduate of the year 2011/2012 of the study course Electrical Engineering and Information Technology at KIT. Mr. Schönleber has been an assistant at IAM-WET since December 2011 and works in the field of lithium-ion batteries. We congratulate Mr. Schönleber very much and wish him all the best for his future!"